As temperatures across Europe beat records summer after summer, air conditioner manufacturers rub their hands in glee. No wonder - their sales are skyrocketing. By 2050, the IEA expects the number of air conditioners in buildings to reach 5.6 billion, up from 1.6 billion today. Around two-thirds of the world’s households could have air-con by then. 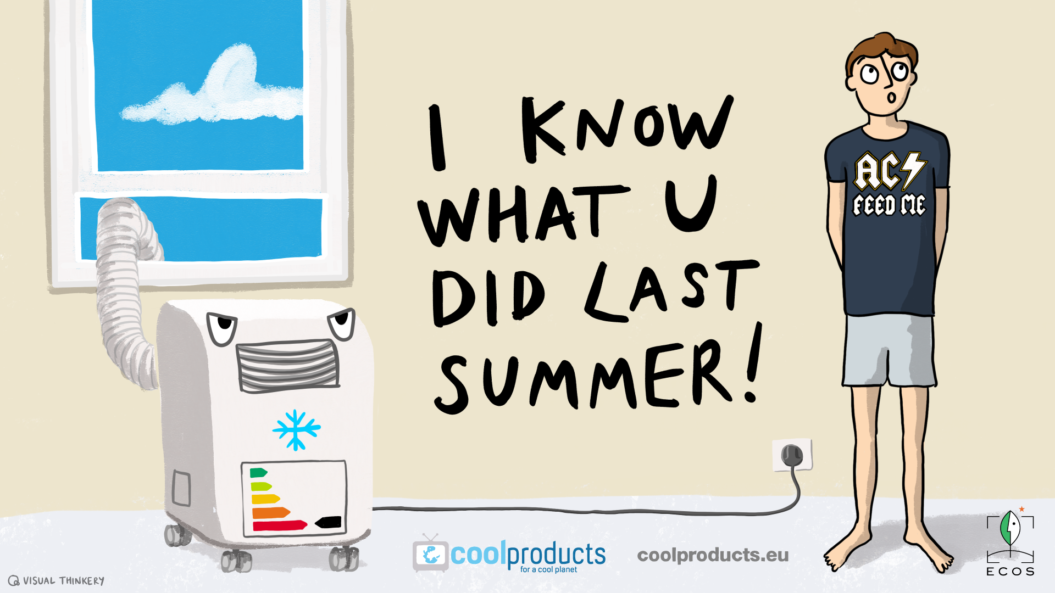 China, India and Indonesia together are expected to account for half of the total number of units. But air-conditioners will become more common not only in far-off countries. In the European Union, electricity use for air conditioning is expected to rise from 40 TWh in 2020 up to 62 TWh in 2030 – the same as the residential electricity consumption of Italy.

A surge of this size means a very serious threat for a spike in greenhouse emissions from air conditioners, which in turn will contribute to raising the world’s temperatures even further. The more we try to cool down, the warmer our planet will be.

The good news is that it is in our hands to cut air-con emissions – while we all stay cool. We just need to bet on energy-efficient technologies. And do it soon, before it is too late.

The environmental price of an impulse purchase

Portable air conditioners are the least efficient air conditioning systems on the market – yet, they are very popular. More than half a million units were sold across the European Union only in 2015, accounting for 14,2% of the total air-con sales. In some countries such as Germany and Austria, more portable than wall units were sold. As no installation is required, their convenience scores high among new buyers. Especially during heatwaves, when many just want to cool down their house quickly and easily. 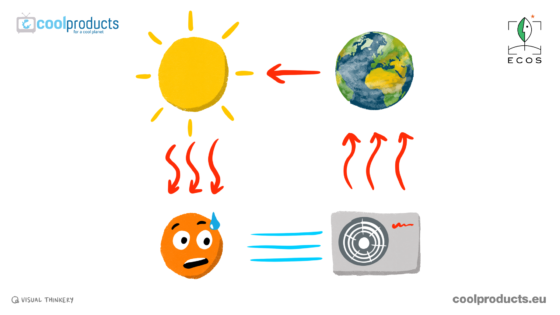 In the European Union, there are 4.3 million portable air-conditioners chilling our houses as heatwaves strike this summer, according to estimations. If turned off, every year we could save 0.35 million tonnes of CO2 – the equivalent of 200,000 round-trip flights from Brussels to New York.

The use of air-conditioners could often be avoided altogether, by taking easy steps at home such as keeping the windows and blinds or curtains closed during the day. And if air-con cannot be avoided, installing a split unit on the wall would help you cut your energy use.

Using portable units is not only harmful to our planet; people need to know that this convenience costs them a lot of money.

Portable air conditioners are electricity-hungry appliances just because their design makes them much less efficient than wall units. It is estimated that using a split unit will cost approximately 45€ over the summer, while using a portable appliance would cost up to 180€, according to an estimation by a French site Que choisir.

The European Union does have a tool to inform buyers on the energy efficiency of new appliances: energy labels. Using a colour and letter scale, they are designed to show customers at a glance which appliances consume less electricity and help them make better choices not only for their wallets but also the planet.

Unfortunately, the system does not work well in the case of air conditioners: labels on portable air conditioners are not comparable to those on wall units. To cool the same area, an A+ class portable unit guzzles 2.4 times more electricity than A+ class wall-mounted systems, because their efficiency differs greatly. 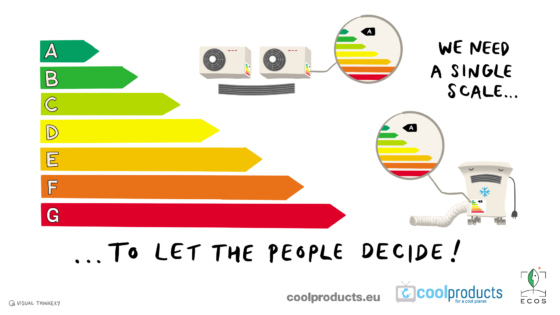 Why are portable air conditioners so inefficient? In every air conditioning system certain parts need to heat up in order to cool down the air. For portable appliances, these parts remain inside the room, increasing its temperature, while in a wall unit they are placed outside. In addition, portable units suck out part of the cool air they themselves produce, and thus decrease the air pressure indoors, which causes more warm air to migrate in from the outside.

Even if portable units can be useful sometimes, they should always be a last resort, for example for people living in rented houses or historical buildings. For consumers to understand this quickly, energy labels on portable AC devices should be comparable to those on wall units. Only this way can we prevent consumers from making impulse, uninformed choices – and mitigate the huge threat the growing popularity of air conditioners poses to our planet.

The European Commission needs to act on this, now. In fact, the opportunity to take action is right there: the Commission is working on revised rules for air conditioning, including a proposal to update the current Energy Labelling Regulation and introduce a common energy label in 2021.

And while we’re at it, let’s end F-gases

Making energy labels clearer is not the only thing the Commission can do to reduce greenhouse emissions from air-conditioners. Rules should be introduced to limit the use of synthetic refrigerants, too.

To cool down our rooms, air conditioning systems use refrigerant gases, which have always been very problematic for our environment. The European Union banned the use of the harmful CFC gases in the early 90s, as they were depleting the ozone layer. Instead, HFCs, a family of synthetic fluorinated gases (or F-gases), were introduced as refrigerants. F-gases are not harmful to the ozone layer, but they do have a very high greenhouse warming potential, up to 2,000 times higher than CO2 for some of them.

The good news is that there are greener alternatives to synthetic F-gases, too. Alternative refrigerants such as propane or CO2 are being phased in as greener alternatives to HFC gases, the most-widely used F-gases in fridges and air-conditioners, but their uptake is still limited as industry and regulators have concerns over their flammability. However, recent research has proved that introducing higher ceilings to the use of climate-friendly refrigerating agents is safe.

Unfortunately, the Commission has deleted the reference to refrigerants in their latest draft of the new Ecodesign Regulation on air conditioners, as it considers that F-gas restrictions should be addressed only in a dedicated piece of legislation, the EU F-Gas Regulation. However, we encourage lawmakers to include a reference to F-gases in their Ecodesign Regulation too as it would send a clear signal to the market in support of cleaner alternatives.

Right to repair… for AC!

In addition, air conditioning appliances are difficult to repair, disassemble and maintain. This often results in shorter product lifespans and leakages of polluting refrigerant gases due to inadequate repair interventions.

To tackle this, the European Commission should require manufacturers to design air-conditioners that are easier to repair and to provide with a much wider availability of spare parts. Only this way will air-cons last for longer and limit their negative impact on the planet.

This summer, Coolproducts is launching a campaign aimed at raising awareness of the fact that portable air conditioners are energy-wasting devices. In parallel, we will ask European policymakers to help consumers make well-informed choices when it comes to cooling appliances.

To this end, we ask the European Commission to:

Only together can citizens and policymakers make sure we use the best available technologies to cool down our homes during the increasingly hot summers. Waving goodbye to inefficient portable air-conditioners is possible. Let’s do it now.