New report! One Charger To Fit Them All: Using ecodesign to deliver an ambitious common charger initiative

Developing a single charger for phones, laptops and other small devices is not as straightforward as it seems. Even with a common connector, consumers need standardised and clear information on the features that chargers available on the market have - such as voltage, charging speed and data transfer functionalities. At the same time, manufacturers must stop shipping charger with every new device. Our new report puts forward a package of innovative ecodesign policies which, if implemented, will bring about huge environmental savings and help avoid tonnes of pointless e-waste. 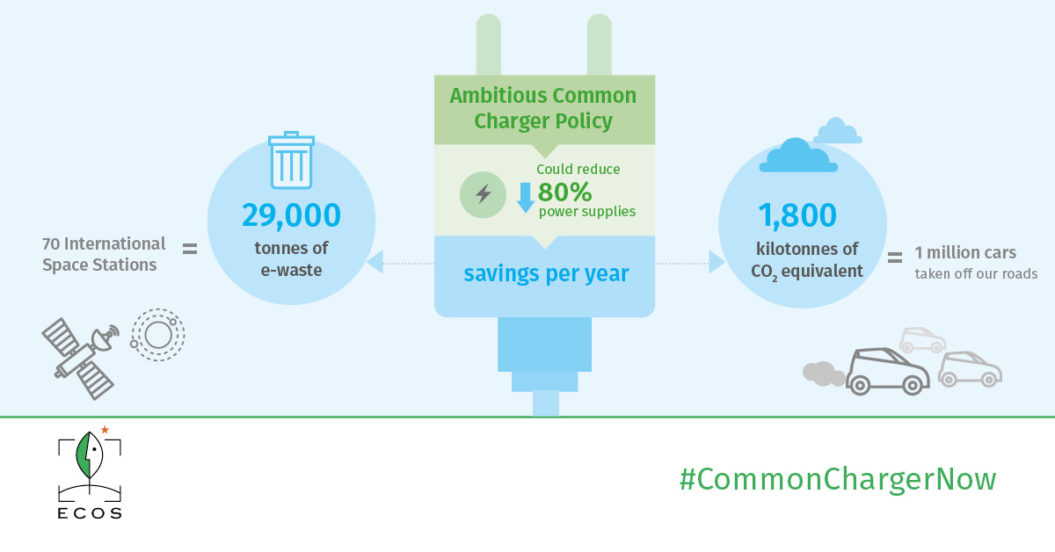 An estimated half a billion chargers are shipped for portable devices in Europe each year – and many of these are duplicates of chargers that consumers already have at home. A common charger for all our devices could put an end to most of this pointless waste.

The situation today is better than a few years ago. Thanks to a voluntary agreement signed by the industry in 2009, we have shifted from more than 30 to three main charging solutions for our smartphones. But there is still a lot of room for improvement. The European Commission is currently looking into the regulatory formula to go further and introduce a single common charger. As it happens, the Commission might just be overlooking the possibility of making its initiative genuinely ambitious.

A common charger could result in savings of around 29,000 tonnes of e-waste per year – as much as over 70 International Space Stations put together. In addition, it would reduce the associated greenhouse gas emissions by over 1,800 kilotonnes of CO2 equivalent, which corresponds to some 1 million cars being taken off our roads.

The devil is, of course, in the details. These are the five main hurdles we still need to overcome:

1. Not only phones and laptops – each small device has a different charger
To achieve a drastic reduction of e-waste generated by chargers, we need to think beyond smartphones. At home we have many more small appliances that could use the same charger as phones and laptops. Think of shavers, razors, alarm clocks, loudspeakers, portable game consoles, vacuum cleaners, or small tools such as drills, polishers or cutters. Today, each time we buy one of these, a new charger is added to our large home collection. We could perfectly charge them with a common USB type C charger and cut all that waste, and the EU already has a legislative tool to make it happen – the Ecodesign Regulation, which for now is overlooked by the services in charge of the initiative.

2. Chargers having the same plug may have a different voltage
Using a too powerful charger for a small device can lead to its burning. On the other hand, a low-powered charger used with a power-hungry device could damage the port or the charger itself. Luckily, this problem can be easily solved by setting clear rules. The newest versions of USB type C (protocol 3.1 and higher) have a feature called “power delivery protocol”. Thanks to that, the charger can communicate with the device to know how much power it needs, so that the same charger can be used to power devices of a different size, without overheating. For this to work in practice, the charger packaging should clearly indicate the cable voltage and be mandated to include the power delivery protocol feature that allows for interoperability across devices.

3. Chargers can have different features – and those are often not communicated on the box
Besides voltage and power delivery protocols, chargers have different features. USB cables allow for different modes such as power delivery only, power and data transfer, at varying speeds andpower, data and display delivery. Plus, some cables include “fast charging” features. All these features need to be clearly indicated to consumers, while the fast charge feature should also be harmonised in order to be available across the different devices. Otherwise, it is likely that many will be disappointed with charging times, and with some desired features not working – leading them to demand one charger per device.

4. Today, a charger is included in the box with every single device
Even if every phone and laptop manufacturer started using a single plug, little savings will be achieved if every device we buy continues to come with its own charger inside the box. The EU should impose the decoupling of charger sales from devices. Only this way can we help reduce the size of the tangled cable heaps most of us have at home. Today, Fairphone is the only mobile phone brand not including a charger in the box.

5. Wireless charging is not harmonised
The wireless charging option is slowly growing in importance – although by 2017 only about 29% of mobile phone users said to have used this feature. Currently, most phones use the Qi standard, but, as standards are voluntary, nothing prevents a company from introducing a different one in their new models. There is a risk that they develop tailored fast charging protocols to enhance the charging process for their specific device – similarly to the case of wired chargers. This means that for the fastest charge of a smartphone, it may be necessary to use the wireless charger made by the same manufacturer, once more creating a need for multiple chargers at home. To avoid this, the European Union should set a mandatory common standard for wireless chargers so that we don’t find ourselves with a new mountain of wireless chargers at home.

It may sound like a daunting task but is not impossible. Our new paper clearly shows the way for policymakers to make this meaningful change happen.