Better products for a greener Europe

Thanks to ECOS, in 2021 all TVs, monitors, fridges, freezers, washing machines, washer-dryers, dishwashers and lighting products sold in Europe will be more efficient and will have to meet minimum repairability requirements aimed at extending their lifetime. 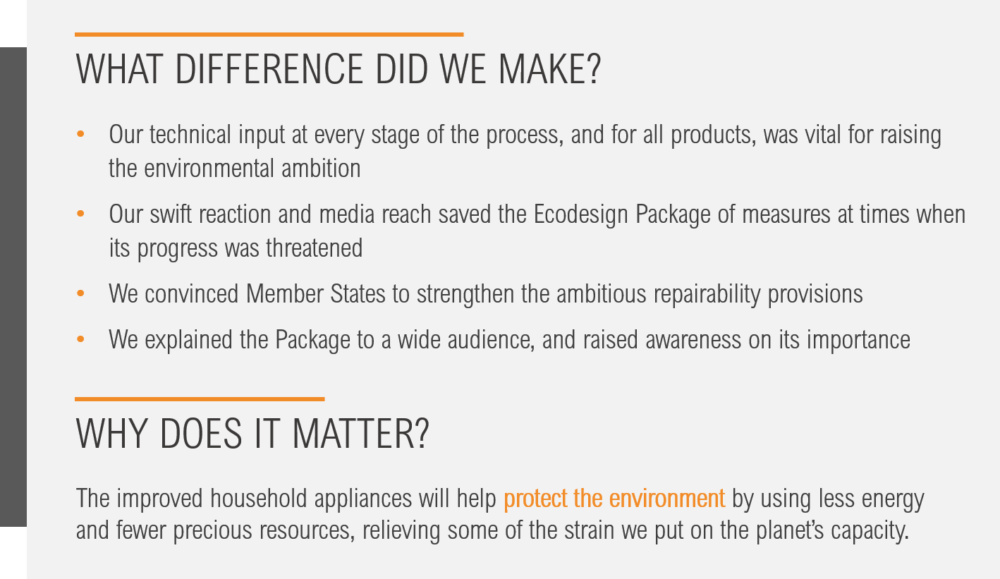 Together with new energy labels, the new energy efficiency requirements will help the EU save an additional 140TWh of energy a year, which corresponds to 5% of the EU electricity consumption. For consumers and companies, this means €20 billion saved on energy bills.

In October 2019 the EU adopted new laws which will make these products easier to repair and more energy efficient, saving people money as well as reducing pollution. This is a fantastic ending to a complicated and lengthy process, which ECOS influenced from beginning to end.

This new set of measures is part of the EU’s Ecodesign Directive, which removes the most wasteful products from the market, replacing them with models that do the same job with less energy and resources. Thanks to them, for the first time, manufacturers will be obliged to make several home appliances easier to repair. The new rules will also cut the energy needed to power them.

As of 2021, all TVs, monitors, fridges, freezers, washing machines, washer-dryers, dishwashers and lighting products placed on the EU market will have to meet minimum repairability requirements aimed at extending their lifetime. These products will also be made easier to recycle thanks to improved design and, in the case of displays, the removal of halogenated flame retardants.

ECOS – together with the Coolproducts campaign we co-lead – advocated for a swift adoption of an ambitious package of measures, and was active in all steps of the decision process. How exactly? Read on!

We provided technical analysis and proposals throughout the review process, thoroughly reviewing all regulations included in the Package. We also published position papers and vote recommendations, as well as took part in public consultations. Our analysis was then shared by the various partners at national level, uniting a wide community of NGOs and supportive industry players. We also met key EU officials and industry players to discuss the developments with the view to keep high ambition of the measures.

Throughout 2018 and 2019, we made sure that our recommendations travelled places. We disseminated the Coolproducts campaign’s messages to all Member States representatives, and spent a substantial amount of time briefing national partners who relayed our views in national stakeholder discussions.

map triggered a series of petitions and media coverage in several EU countries. As a result, some Member States listened to the calls and decided to propose ambitious provisions, a change of heart triggered not only by our map but also by the media event we staged together with NGO and repair partners. Chanting “Long live the fridge!”, we formed an alliance which led us to co-founding the European Right to Repair campaign, launched in September 2019.

Because when we believe in something, we are prepared to fight for it. There was a time when it seemed possible that the Ecodesign Package would never become reality – after years of work and preparation its future was suddenly threatened by the European Commission. You do not scrap laws which can help protect the environment though, not on our watch! We made sure this news went public, and convinced 50 signatories to join us in expressing concern – including NGOs, Member States, MEPs and industry associations. To top it off, we created social media rush and media pressure, which proved instrumental in unlocking the situation. We made it – the Package was secured.

This was not the only time we put pressure on policy makers, though. Despite strong opposition from the chemicals industry, we ensured that the hazardous halogenated flame retardants in plastic parts of electronic displays will be banned from the EU market. This sets a positive precedent in using ecodesign requirements to support a circular economy, which can be extended to other product groups in the future.

Celebrate, and move on the next challenge

The Ecodesign Package was finally adopted in 2019, and we made sure the wider public was aware of the benefits that it will bring about for both the environment and EU citizens. In 2019, we focused on extensive communication around the adoption of the Package. We released a comprehensive briefing entitled “Ecodesign and Energy Labelling Package, All you need to know”, which explained this complicated piece of legislation in simple words. We also published an infographic, calling for including repairability and durability parameters in the revised energy labels (“The Energy Label should go circular” ).

Together with the Coolproducts campaign, we circulated the good news to the press, sparking an unprecedented press coverage for ecodesign – including quotes in the European Commission’s press release, Forbes, the BBC and Euractiv.

We are now proud to say that, thanks to our perseverance and the dedication of our partners, the EU adopted rules which will give the environment and consumers better products. And while we celebrate this success, we also look ahead – several crucial product groups, such as smartphones or computers, are not yet regulated by ecodesign. But we are here to ensure it happens.