Unnecessary hazardous substances in our electronics? No, thank you! – ECOS fight against flame retardants

In 2008, ECOS played a key role in ending the default addition of chemical flame retardants as standard for screens and other electronic devices as part of an international alliance of environment and health NGOs and research institutes. 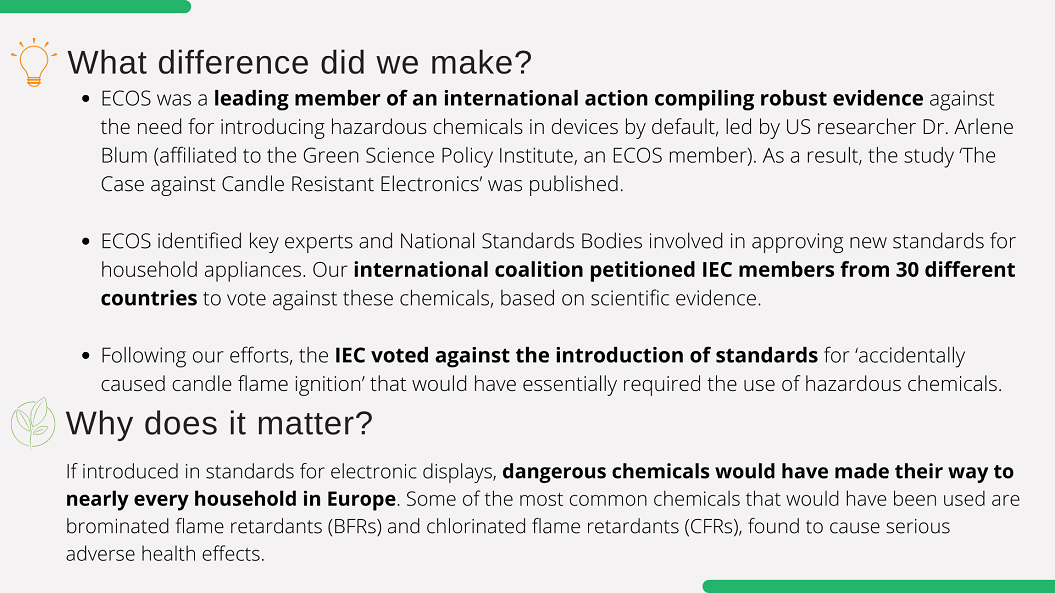 TVs, screens, laptops and other electronics are well protected against potential fire ignition from internal sources. However, some years ago international standardisers seriously considered the possibility of requiring the addition of chemical flame retardants into the appliances’ external casings.

With that, standardisation bodies sought to avoid fires that small flames – candles, for example – could start if in direct contact with appliances such as TVs. This proposal, driven by the chemical industry lobbyists and aiming at mitigating a risk in itself very small, would have provoked an environmental and health catastrophe: it would have been nearly impossible to get rid of these chemicals after they entered the recycling chain. As a result, they would be found in other products due to illicit recycling practices, or end up in landfills – or incinerated – at the end of the appliances’ lives causing additional health and environmental damage when released into soils or the air.

In fact, such retardant chemicals – still used, for example, in furniture and cables – are increasingly found in indoor dust, food and breast milk. The European Food Safety Agency also recommends to regularly check for brominated flame retardants in food.

A group of international NGOs and research institutes, where ECOS played a leading role, collected evidence on the risks these substances pose to human health and the environment, and led an awareness-raising campaign requesting National Standards Body experts involved in the approval process to oppose the default introduction of chemical flame retardants in electronics.

As a result, in 2008 the international standardisation body IEC voted against a standard that would have essentially required the introduction of dangerous chemicals in electronic equipment casings. In 2015, persuaded by the strong evidence against chemical flame retardants, standardisation bodies IEC and CENELEC also decided to rule them out in four international and European standards (IEC/EN 62368 and IEC/EN 60065).

Since then, chemical-free standards have paved the way for explicit bans on unnecessary chemicals across the world. For example, the European Union is banning brominated flame retardants in plastic casings and stands of electronic displays as of March 2021. A ban that would have been unlikely to happen if international standards did include flame retardants in their specifications.

ECOS played a leading role in these actions, working closely with organisations from across the world, including our Members the Green Science Policy Institute and Friends of the Earth, as well as organisations such as the Center for Environmental Health and the International Chemical Secretariat.