Fighting hammer and tongs for… a universal Right to Repair!

From campaigns to the development of standards, in 2019 we put all our tools to use in order to make sure repair has the place it deserves on the EU agenda. 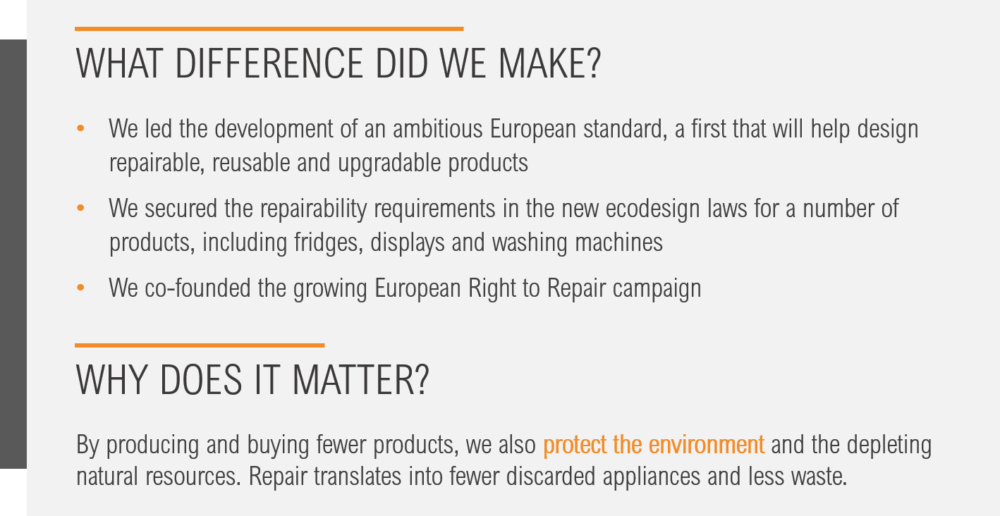 In 2019, the EU took its first steps towards making the right to repair products a reality. New laws for household products – TVs, fridges, washing machines and more – published in October as the Ecodesign Package, contained a number of novel provisions requiring that manufacturers make appliances which are not only energy efficient but also easier to repair and recycle. Two months later, the European Green Deal promised to “analyse the need for a right to repair”.

A standard that works for the environment

Our journey to becoming repair champions started years ago in a rather unlikely place – a standardisation committee. Under the cryptic designation of EN 45554 hides a standard which paves the way for a market transition towards more repairable, reusable and upgradable products, and we are proud to say we played a critical role in giving it shape.

This major step towards systematising regulatory discussions on material efficiency and the development of product-specific standards on reparability would never have taken place without our active and unplacated defence of environmental interests.

The standard provides a way to assess the ability to repair, reuse and upgrade energy-related products under the scope of the ecodesign and energy labelling framework. It contains relevant definitions, lists a number of important criteria influencing repairability, reusability and upgradeability, and establishes a way to compare and score products on the basis of those three aspects. Such criteria include the availability of spare parts and the provision of repair information.

The standard has the potential to provide a methodological basis to further build upon in the ongoing discussions on a European reparability scoring system – a discussion to which we have also contributed with a highly popular infographic entitled “The Energy Label should go circular”.

A ground-breaking set of laws

2019 saw the adoption of the celebrated “Ecodesign Package”, a set of regulations improving the energy- and resource efficiency of eleven product groups. Thanks to our contribution, as of 2021, all TVs, monitors, fridges, freezers, washing machines, washer-dryers, dishwashers and lighting products sold in the EU market will have to meet minimum repairability requirements aimed at extending their lifetime. These products will also be made easier to recycle thanks to improved design and, in the case of displays, free of halogenated flame retardants. 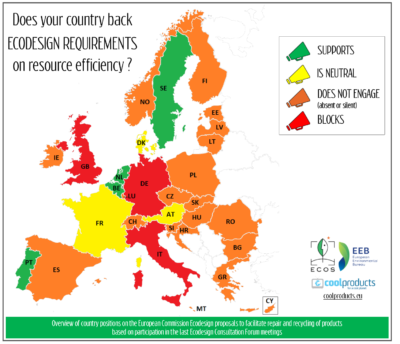 We accompanied the European Commission every step of the way in the development of the Package, and despite a long and bumpy ride, we made sure the general public was aware of Member States’ positioning – our simple map triggered a series of petitions and media coverage in a number of countries, which helped keep the pressure on the hesitating decision makers.

You might also have seen a group of people in front of the EU Council, fervently shouting “Long live the fridge!”. The media event we staged together with NGO and repair partners, featuring the now celebrity unhappy fridge, convinced Member States to vote in favour of ambitious repair provisions in the Package.

But this was just the beginning…

The happening gave us the momentum we needed. Together with partners from the NGO and repair community, we decided to stand up for our European Right to Repair. The campaign idea had been in the air for a while, but 2019 saw its launch: Right to Repair Europe became a reality! 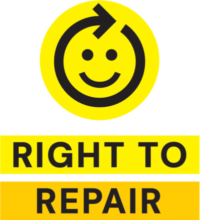 We joined forces with partner organisations EEB, iFixit, Runder Tisch Reparatur and the Restart Project to call on European policy-makers to take all necessary measures so that our products last longer and can be repaired. During the last quarter of 2019, the campaign attracted nearly 30 members from eleven European countries, and won the 2019 Good Lobby “Collaboration of the Year” Award.

With this initiative, we aim to continue changing our production and consumption patterns by highlighting the benefits of the extended lifetime of different products and advocate for ambitious policy measures to make the right to repair a reality.

A long way to go remains before repair becomes the norm, but we are here to make it happen at all possible levels.