The inconvenient truth about e-waste

In our digitalised and tech-hungry world, the amount of electronic and electrical devices is ever increasing. Sooner or later, all of these devices are discarded due to early replacement or defects. E-waste is one of the most problematic waste streams globally because of its large volume and the environmental risks it poses, largely due to hazardous substances . In 2016, more than a quarter of the 44,7 Mt of e-waste produced worldwide was generated in the EU with an average of 16,6 kg/person. So what happens with this mountain of e-waste? 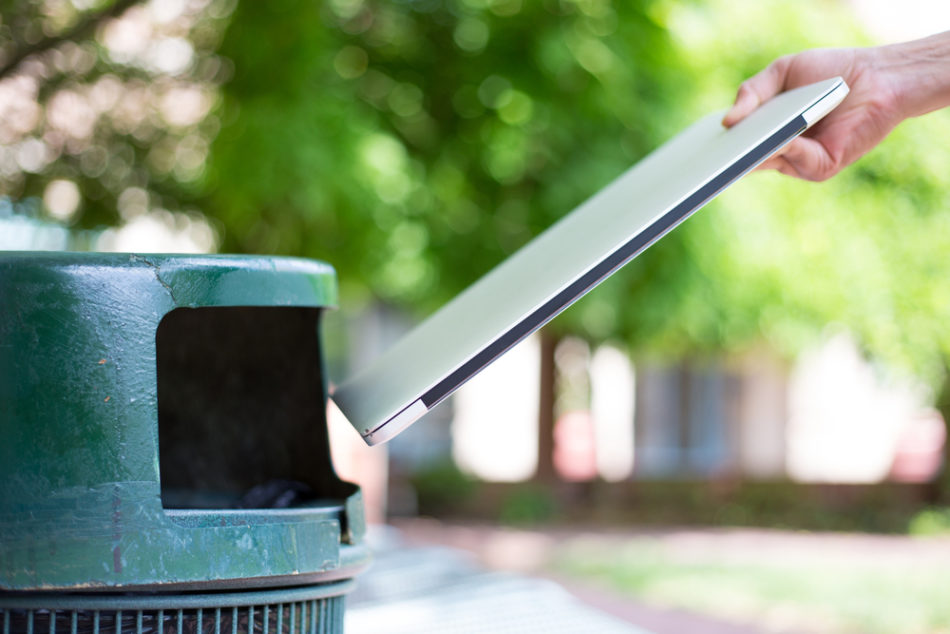 First the good news. In 2016, the EU countries managed to reach an overall 49% collection rate (in relation to the average amount of e-waste put on the market in 2013-2015, according to EU statistics), which is above the 45% target set by the Directive on Waste Electrical and Electronic Equipment. The bad news is that many Member States are unlikely to reach the new collection target of 65% set from 2019 onwards. There are differences in recycling rates between Member States, ranging from 1.6 kg per inhabitant in Romania to 16.5 kg per inhabitant in Sweden. Overall, around half of all e-waste is not separately collected or properly recycled, leading to a loss of valuable resources as well as chemical pollution, both within and outside the EU.

There are many obstacles to reaching higher collection and recycling rates, from incorrect disposal of e-waste to insufficient infrastructure and inadequate recycling facilities. A structural problem that few consumers are aware of is the scavenging of e-waste, which happens to about 22% of all e-waste in Europe. In simple terms, scavenging means that operators dismantle e-waste, keeping the most valuable parts for themselves and discarding other components unsafely, without complying with any rules or regulations. This is problematic because of the presence of toxic substances in e-waste, such as brominated flame retardants but also hydrofluorocarbons in temperature exchange equipment (TEE). About two thirds of waste fridges and air conditioners do not reach legitimate recyclers, leading to an environmental impact equivalent to the CO2 emissions of 6 million cars annually. Unfortunately, many operators get away with this because they are neither tracked down nor held accountable by national authorities.

Even when e-waste is reported to be collected, the level of treatment often remains inadequate. Earlier this year, our Portuguese member ZERO analysed national collection and treatment figures of e-waste from 2017, which revealed that Portugal did not meet its 45% recycling target. The study revealed that not only is the official data inaccurate, but, worse still, illegal practices are taking place without intervention from the Portuguese authorities.

Yet the most worrisome issue with e-waste is the (il)legal export [1] of equipment to countries where proper recycling facilities are not available. Even though export is restricted by the EU Waste Shipment Regulation[2], it continues to happen because of weak enforcement. Reuse is sometimes used as a pretext to ship e-waste legally to developing countries, even when its second life cannot be guaranteed. The process starts with “recycling operators” in Europe moonlighting as brokers who outsource the dismantling and disposal of e-waste to countries with weak environmental regulations and poor human rights track records. There, e-waste is often taken apart in poor conditions, burnt and dumped in the open, poisoning people and the planet.

After almost 15 years of the WEEE Directive implementation, how is this still possible? One of the main reasons why these illegal and unsustainable practices occur, is inadequate enforcement of EU legislation and national environmental regulations.

To reach significantly higher recycling targets, monitoring and control of waste practices at national level must improve. This requires more financial and human resources for national inspection agencies to combat substandard waste treatment and export. Illegal practices should lead to immediate sanctions, such as fines and withdrawal of permits, to deter non-compliance.

Furthermore, the Extended Producer Responsibility fees (covering the costs of collection and waste treatment) should be set at an appropriate level. If they are too low, they create an economic incentive for operators to cut costs and look for the cheapest way to get rid of e-waste. Also, more transparency is needed as to which companies circumvent the existing legislation, while, at the same time, granting civil society access to national WEEE committees overseeing the sector.

Fortunately, there are several actions ongoing to improve the implementation of the WEEE Directive [3], and a number of tools have been made available to help Member States combat illegal export [4].

The role of standards

It should be crystal clear for authorities and operators what the minimum requirements are for safe and environmentally-sound collection and treatment of e-waste. Standards play an important role here, providing operators with the necessary technical guidance. For instance, the EN 50625-1 standard on general treatment and depollution describes how to test and remove restricted brominated flame retardants.

Yet it should be kept in mind that the standards are voluntary and certification through WEEELABEX is optional. Since the existing standards are not harmonised throughout the EU, they offer no presumption of conformity. In short, standards are currently not a strong enough instrument to ensure proper treatment of e-waste.

Therefore, some stakeholders are lobbying to make all standards legally binding. Although we acknowledge that standards are an important tool to improve the collection and treatment of e-waste, we believe EU regulations complementing the WEEE Directive would be more effective and democratic. Minimum quality requirements can be largely based on standards, but a direct copy should be avoided because the current versions are not perfect yet. Particularly, the standard on preparation for reuse presents significant shortcomings and should remain voluntary. A careful revision of all the standards is needed to make sure they truly reflect the state of the art – our discussion paper already gives some suggestions.  We hope the European Commission will take this into account when (potentially) preparing a implementing act to improve the legal framework for e-waste treatment.

To really transition to a circular economy, we should proritise reducing the amount of e-waste in the first place, through ecodesign, repair and addressing consumer behaviour. Do we really need all those new gadgets, ever faster devices and flat screen panels on every street corner? As long as we do not set limits to the proliferation of electronic and electrical devices, the mountain of e-waste is here to stay.

[2] Regulation (EC) No 1013/2006 which transposes the provisions of the “Basel Convention on the Control of Transboundary Movements of Hazardous Wastes and Their Disposal” as well as the OECD Decision. The Regulation includes a ban on the export of hazardous wastes to non-OECD countries (“Basel ban“) as well as a ban on the export of waste for disposal outside the EU/EFTA area.

[3] Such as WEEE compliance promotion exercise here and initiatives by the European Union Network for the Implementation and Enforcement of Environmental Law (IMPEL) see here.